Snowy days, snowy nights and I love them all!  Since most of the country is experiencing this winter storm I won’t go into details but I have been dreaming of what being snowed in would be like in our new home and I was not disappointed.  The view of the mountains is really a peaceful sight and since we are so far up there is nothing but quiet soft sounds of the snow falling.  I’m really in my happy place in the mountains!

I know I’ve been neglecting my blogging lately but computer and blogger problems keep popping up for me.  Mark worked on my computer last night so hopefully this will clear up the issues at least for a little while.  He says it’s nothing I’ve done or downloaded but just some glitches so crossing my fingers that it’s fixed now.

We survived Christmas and got to spend a glorious week in AR with family.  I got to meet my great niece, Zeva and I spent every minute I could holding her, feeding her, snuggling…..  I just fell head over heels in love with this sweetie.  I thought when Zared was born that I would never experience love like that ever again but then Rachel, Kelton and Josi came along to prove me wrong…..and then there was ZEVA and I know my heart exploded.  She looks just like her grandpa (my brother, Jeff) and her daddy (Zared) but she is just a doll baby.  I cried when I met her, I cried when I left her and I’m tearing up just writing this post.  I really need to get back to AR next month to see her again because she’ll grow up faster than I can blink an eye and I don’t wanna miss a thing.  Yes, cue up Aerosmith 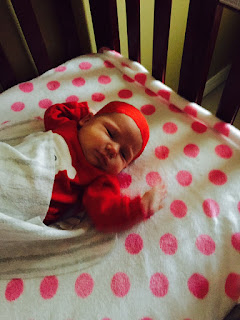 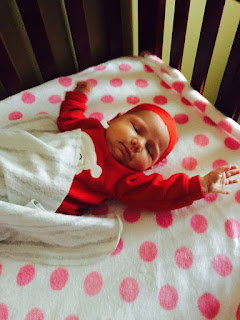 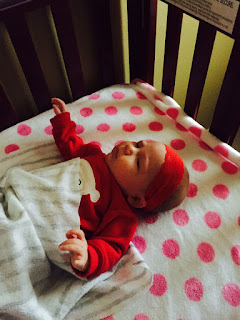 'Cause even when I dream of you
The sweetest dream would never do
I'd still miss you, baby
And I don't wanna miss a thing


I have spent some time thrifting lately and I have found a couple of real treasures.   The Habitat Restore runs a silent auction a couple times a month featuring antiques or unique collectibles.  I had never participated in one until earlier this month.  They had an amazing store cabinet that still bore it’s original stenciling advertising silk threads and I just couldn’t resist bidding on it.  They also had a painted step back that was great but I just wasn’t sure it was actually old or a made to look old from India so I bid low on it.  Well long story short this jewel came home with me!  Right now it’s on the front porch but I’m sure it will end up in multiple places while I own it because it’s fantastic!!!!! 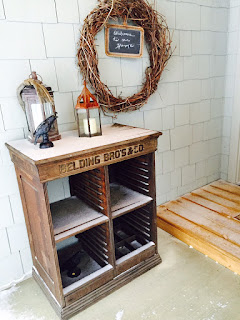 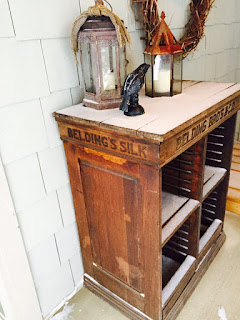 Also the local Hospice thrift store runs estate sales….what, what????  Yep and they are looking for volunteers so this may be my calling in life.  I got an application and as soon as we get a break in the weather I’m going to submit it.  I’ve been looking for something to allow me to meet people, be useful and give back to the community and this sounds like a perfect fit for me.  I’m really excited!  But in the meantime, I also bought a couple of things from the first sale I attended and I think they are real treasures.  We are going to use the cherry cabinet in the laundry room when it’s remodeled next month (more on that later)  and it is just really nice.  Mark found a signature and date on the bottom so it was handmade in 1991 and all solid wood not particle board.  I had first thought I would paint it but after looking it over again at home, we have decided that it’s perfect patina is just too nice to paint over.  I also picked up this little egg basket which I put on the old chair on our staircase.  I also made the Old Crow by La-D-Da into a pinkeep stuffed with wool scraps to sit there.  It’s hard to see because I used such a dark chocolate linen but it’s really prim perfection.  I stitched the crow when we first moved to Germany but just had never done anything with it.   As soon as I set the basket on the chair I knew exactly what I wanted to do to set it off.  I really like how it turned out.  And finally I got this little metal sewing machine.  Now you know there has to be a story to go along with all my purchases and this one is no different.  I was at the sale and I had already bought the cabinet and basket when I saw this little little beauty sitting at the end of the counter.  I asked the ladies if that was sold or was it being held for another shopper and they had no idea.  We talked about how people set stuff aside then forget it and leave or another shopper nabs it before the original shopper gets ready to buy then they get yelled at, ect…..I said I’d wait around a little longer to see if anyone came back to claim it.  This sell is held in a commercial building so it’s big wide open space and you can see all the shoppers so I asked around if anyone put it up there but no one knew anything about it.    There weren't more than 10 shoppers so it was easy to ask them all about it.  I waited and waited and waited then finally this guy came walking back into the building and I recognized him from being there when I first arrived..... At this point in my stories, Mark starts saying “Just wrap it up”….anyway I asked the guy if he set it aside and he had so I told he’d almost lost it because I wanted it.  We stood there for a couple of minutes chatting and he said you can have it!  He said he had no real plans for it and if I liked it enough to wait around for it then it should be mine.   I was just thrilled and I know nothing about it other than it just spoke to my heart.  It looks great in my trencher with my tomatoes and strawberries on the front entrance hall table doesn’t it?  I’m a firm believer in what goes around comes around so if you are a nice person someday it will pay off for you and that was my day.  So here's the egg basket and Crow pinkeep 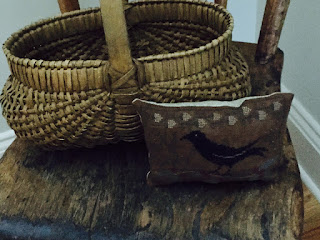 The one below I snagged off the net so could see the design better.  I hate that my phone distorts color so much.  Anyhoo the picture said it was stitched by The White River so want to make sure I give her proper credit since her stitching is just perfection. 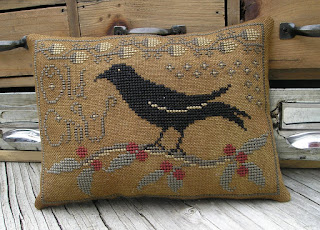 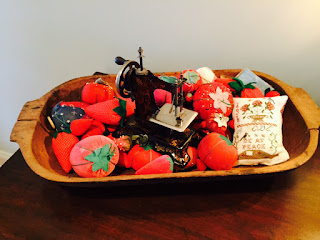 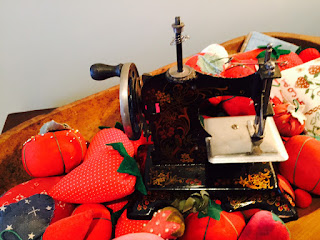 I have been stitching quite a bit on Prim Sisters School of Needlework by Pineberry Lane.  I won the kit on ebay and should finish it up this afternoon while watching Elementary.  Then I need to pick my wip of Away We Ride by Blackbird Designs which I put down to stitch a couple of charts that had loaned to me by a friend.


Alright enough for now but will blog next week about the master bathroom and laundry room remodeling saga that is starting in a week.  We’re not doing any of the work ourselves and I’ve hired a contractor so hopefully I won’t get hurt during this process.  Forgot to mention but I took quite a fall at the estate sale when Mark and I went back to pick up my cabinet.  We had it on a rolling platform and the lady working was helping Mark exit the building thru a roll up door which wasn't open high enough for the cabinet to clear it.  In my rush to save the cabinet and possibly my marriage since he would have killed me if it knocked him off the loading dock....wrap it up....I got tangled up and fell against the wall and thankfully two china cabinets that were empty.  Also they were sturdy enough to break my fall without falling over themselves.  I swear I get more clumsy every day so now you see why I said I hope to not get hurt while living in a construction zone.
Posted by Dirty Martini Queen at 10:48 AM