WOW, that one little lyric from Tom Petty is exactly how I feel this glorious Saturday morning!

I quit my job yesterday which if I'm truly honest, I should have done a year ago. I was just determined that I could stick out whatever changes they threw at me, I was too stubborn to see that it was eating away at my self worth just little by little and so I stayed.  I've never been a quitter and certainly had never left a job because I "couldn't" do the work but I'm learning as I get older that comprising yourself doesn't get you anywhere.  It's certainly a "What Have You Done For Me Today" world and quite frankly I was exhausted.  I started having panic attacks every morning before getting dressed to leave for work and it's just not worth it.  I thought after the bank failed that nothing worse could happen to me in my career path but it did.  I'm not putting all the blame on the bank because Mark's constant travel and my own ability to deal with life factored in as well.  But at some point, I realized that I no longer had a career just a job and one that realistically, I hated.  There were a couple of last straw moments over the last 2 months including being told that I was overstaffed so we again cut my staff to 3 1/2 people, I was told that it was not a security issue to leave 2 people alone in the branch while I went out on officer calls to find new business, took away sick and vacation hours from an employee that's been there over 10 years because I had to reduce her hours because of my over staffing and finally yesterday requiring that I force my hourly staff (of which there are 3 1/2) to attend an after hours event without compensation.  So when Mark called to say  signed his contract for our move yesterday, I carried my happy, little heiny down to turn in my resignation letter as quickly as I could.  And yes, I did it at the "event" and she actually had the nerve to ask if I was now staying at the event to represent the bank.  Not only NO but HELL NO Lady!  I just smiled sweetly and said no then I walked away.  They will decide on Monday if they want me to work out my 2 week notice so think I'll stop by the bank Sunday afternoon and clean out my office. I feel like this huge black cloud has lifted and I can finally breathe again.  The tightness in my chest is gone and I really hate leaving the ladies in the branch but I had to get out before it killed me.  Even if we weren't moving, I still had to get out.

Ok now for the Germany move news....we have a signed contract, a nice new car but still no place to live.  I think we're going to move over middle June and stay in a hotel while I find us somewhere to live.  Clarice is very excited about it and even has a new harness, leash and toys for her new adventure.  There is still so much for me to get done here to start this process but at least I have a path forward, no job stressing me out and hopefully more time to "get 'er done" now.

I'm a busy, busy woman today.  I have dinner plans with my BFF Donna tonight so a dinner of fine wine and pasta is in order.  Oh yeah and Morgan's coming too....just kidding Morgie, you know you are a welcome addition to The Donnas because you are the only man strong enough to bodily carry us out to the car after too much fine wine!  Poor guy since Mark's still overseas, Morgie has to deal with us all alone.

And I'm going prim shopping with my new friend Barbara in like 2 hours.  We're going up into the Georgia mountains to hit some shops we've both been to separately and share our love of prims.  Now anything I buy will have to be small enough to box up and take with me or it'll have to stay here at the house.  I'm thinking small enough to pack will be my choice because after all, I'll be furnishing an entire new home over there. 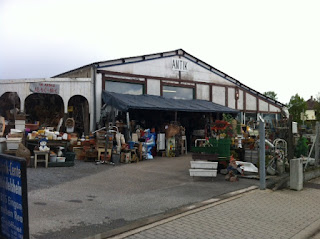 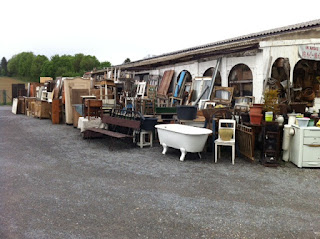 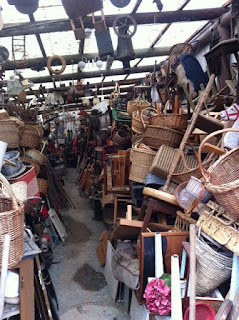 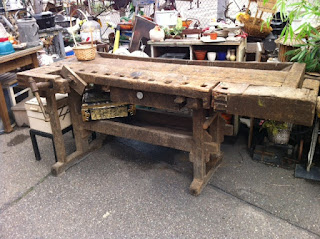 Lastly, I wanted to share a couple of pictures that Mark took last week in Germany while he was scouting out a possible apartment for us.  Now you know you've trained him correctly when he sends these pics and asks for permission to buy that carpenter table.  I told him Yes, Yes because I so can see that as his new desk at home.  Isn't it just gorgeous?  Ok that's it for now because I must shower and get ready for my adventures.  Hope everyone has a lovely Mother's Day!
Posted by Dirty Martini Queen at 5:14 AM